Jim doesn’t know much about the origins of the Kyle family in UK but he knows that his Dad came to New Zealand with his parents as a child around four or six years old. Jim thinks that the Kyle family came to work in rural jobs in the Bennydale area. Jim’s dad and two of his brothers eventually had a sawmill out the back of Te Kuiti in those days when the bush was being milled and cleared for farming.

Jim was born in 1940 out in the back country but then the family moved to town (Te Kuiti) when the saw milling partnership broke up. Jim’s dad bought a tractor and went out doing agricultural work while Jim completed his schooling in Te Kuiti.

At age 16 Jim left school and served his apprenticeship as a motor mechanic at Wright Stephenson’s in the main street of Te Kuiti. WS both sold cars (as part of the Rootes Group) and serviced them. The Hillman was the car of the day.

After working 5 years or so for WS, Jim went to work for the GM agency in Te Kuiti and was there for 3-4 years where he became foreman. This was about mid 1960s. They brought in a new concept of a “service manager” so Jim had a bit of a restructure back to the bench for a while and then to “reception” dealing with the customers from receiving the car to final testing before hand over. This certainly was a concept before it’s time but didn’t go down too well with cockies who liked to talk to the person working on their vehicle to tell him the lambing percentage and what the wool clip was like.

Jim then moved to the VW agency in Te Kuiti. They were quite popular at the time – a “mechanized oil can” Jim called them that took 20 minutes to take the engine out from the rear to work on them.

After that Jim moved to Tirau and did a 16month spell of driving trucks and trailers carting lime from Te Kuiti to a bulk store at Lichfield. He also brought fertiliser from the port of Tauranga to Lichfield which was the centre of a massive land development at the time. Laws preventing competition with the government-owned railways meant that lime for example could not be carted direct from Te Kuiti to Tauranga. It had to be dumped at Lichfield first. Jim said that if you were cheeky enough, you could dump it off and then load it on again, or grab a handful of cobalt and chuck it on the load and carry on to Tauranga!

Then Jim carted “serpentine” (magnesium rich) rock from Aria to New Plymouth and was them persuaded to go back to Te Kuiti into the motor trade as foreman at ?????? company. But Jim was not happy so went out on his own in his Dad’s old machinery workshop in Te Kuiti for 2-3 years and then bought a taxi license.

There were nine taxis in Te Kuiti when Jim started and he bought them out one at a time and ended up with six. Jim said it was a good job when you had good passengers, and being fastidious with his cars, some of his clients had different attitudes.

During this time Jim landed the job of delivering the Sunday News with a trailer he built up for the job from Hamilton every Saturday night about midnight arriving in New Plymouth by 3am. Jim then sold the taxi business and carried on driving adding a bread run from Te Kuiti delivering to Piopio ending at Mokau. The bakery moved to Hamilton to Sunshine Avenue so two nights a week Jim delivered bread as far as Piopio and for three nights he delivered as far as Mokau.

The Franklin Times was printed in New Plymouth and the driver came up as far as 8-mile junction where he picked up the Herald from the service bus. Jim used to meet him and take the Franklin Times on to Pukekohe one morning a week, them come back to Hamilton and after sleeping in the truck all day pick up the bread and head back to Mokau. It was madness Jim said – work all night and sleep all day! At times he would appear during the day and his kids would ask who he was!

This was the mid 1970s and at one stage Jim remembers driving log trucks carting from out around Bennydale to Kinleith, working for a company in Te Kuiti. To cut the hours down Jim would come home, have a shower and tea, watch an hour of TV then park under the pines at the back of Kinleith and sleep in the truck to be first in when the gates opened in the morning to get back for another load. Jim says you can’t get away with that today.

Jim then drove a loader for Robertson Air Services in Te Kuiti for a short time then from 1980-1987 he was an AA service officer for the Te Kuiti area, down as far as Taumarunui, out to the coast at Marokopa, and Te Kawa – 2,200 km of road (a lot of it metal) to look after the signs. Jim really enjoyed those years.

Jim and Shirley came to Hamilton around 1980 and for a short time cleaned cars for a car dealer when the Jap imports started – cleaning around the doors with a toothbrush getting all the sooty pollution off them. He then started to work for the Waikato County Council which became the Waikato District Council which became LATE and then Tanlaw! Jim soon progressed to the truck and trailer unit moving metal for many years and then moving machinery around. Any driver was used to drive the transporter but Jim was given responsibility because of his great concern to look after machinery and keep it in perfect running order. Jim retired from this job based at Tauhei quarry in Woodhill road moving the company’s own machinery all over the region.

Jim first bought a small B-line lathe but was loathe to set it up in the garage of the previous house because of the way he likes to keep his cars. He bought a new B-line and still never turned until he moved to his present house in Huntington that had a 2 x 2m shed in the garden. In 1999 Shirley signed him up for Fred’s course so he bought a 3000 Teknatool lathe and he was in business.

Jim’s interest soon developed into small pieces of great intricacy so he progressed to a big Tanner which he enjoyed, to a small Comet and then to a Mercury. Now with a VicMarc VL100 Jim’s engineering background shows clearly in his interest in small precision pieces. Initially well demonstrated in his exquisite pens, especially the ones he makes in black Maire and yew and now in the many intricate and detailed small bird cages. He particularly enjoys using contrasting woods which are put together with extraordinary attention to detail. Jim enjoys demonstrations by other experts which give him ideas for his own techniques but essentially, he is intuitively a master of his craft. 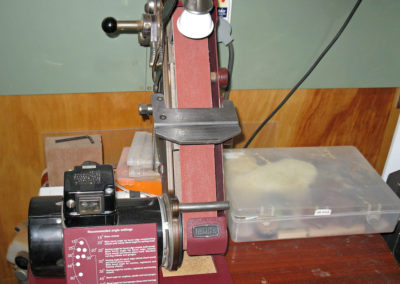 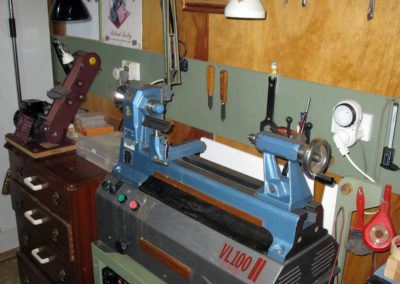 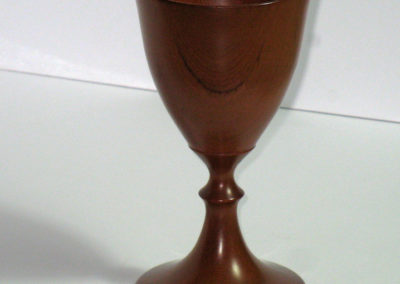 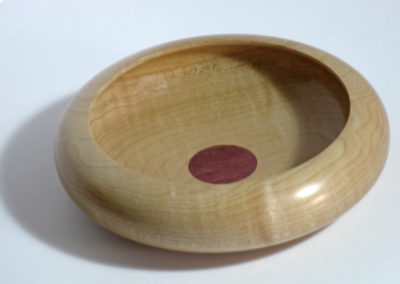 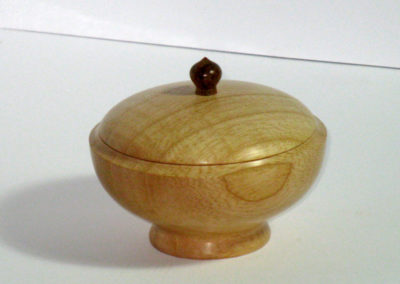 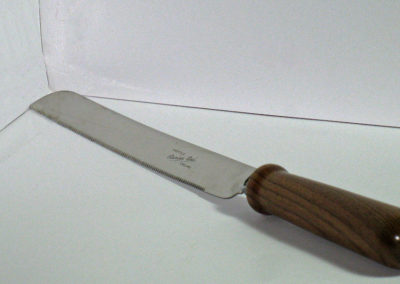 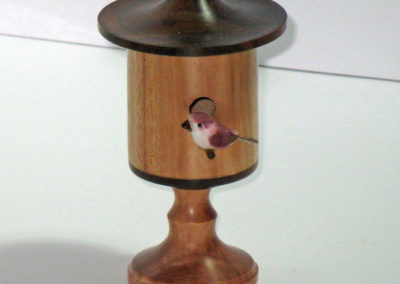 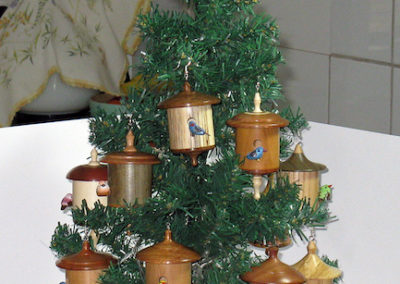 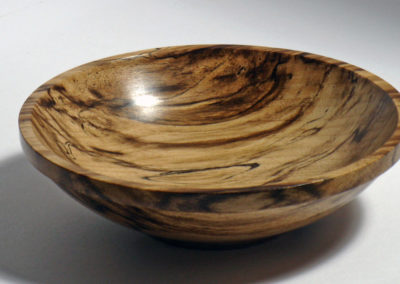 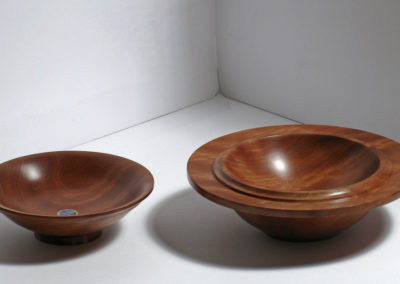 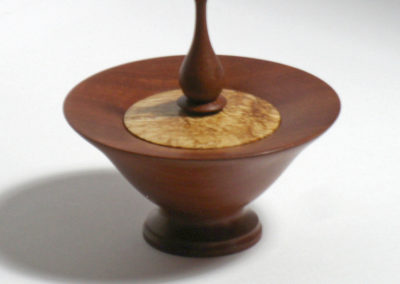 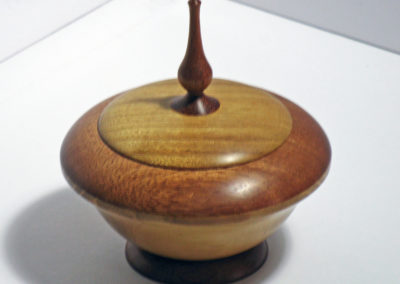 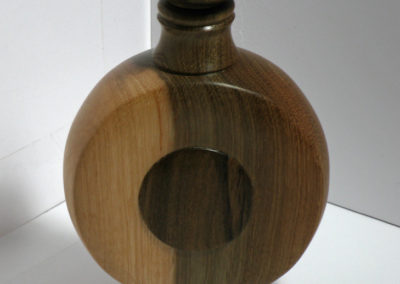 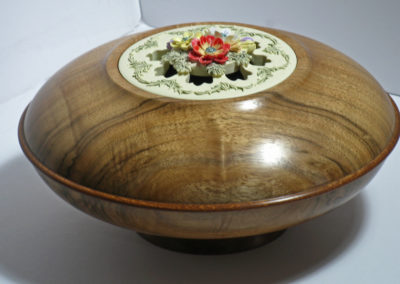 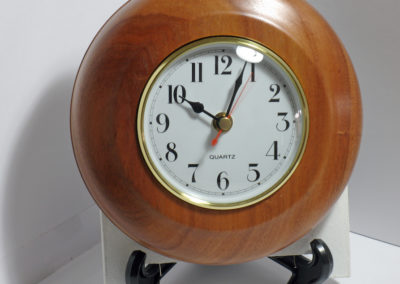