Rex was born in Te Aroha in 1929 on his parent’s 8 acre farm. Eight acres was considered a “farm” on which they milked cows to make a living and brought up a family. It cost them ₤280 in 1929 just before the slump.

Rex’s great grandfather had come to New Zealand with a grown up family from Leeds in UK in the 1880s and great grandmother went in service with a Mr Masters of Masterton who had a lot of land in the area. Great grand father had the honour of being the first white settler in Paihiatua

Rex’s father started as a carpenter but as he had taken a bullet in his forearm at Gallipoli he had a problem using a hammer and had to have a career change. So he was allocated a rehab farm at Kereone near Morrinsville on return from the 1914-18 war. Rex said his Dad survived Gallipoli and Pachandale but he couldn’t survive the ravages of mastitis that hit the herd, and with no antibiotics in those days many cows died. .

The Hall family came to Hamilton in 1940 and lived on Hillcrest road where his grandfather had a little farm in Hillcrest – really 50 acres of gully which the family referred to as “the old mans fifty.” It had come into the family back in the land settlement after the New Zealand wars.

Rex left school in 1945 and worked on a farm as there were no other jobs at the time because ex servicemen got priority. He wanted to get into the carpentry trade but there was no hope. However a job cropped up that his father heard about as a “coach builder” in Hamilton at “Farm Implement Repairs” right opposite the present police station. The work involved making trailers and truck bodies but they also had to do the very tricky job of repairing wooden wheels from buggies and the early cars.

Although Rex officially served his time as a “coach builder”, part of his apprenticeship agreement was to spend half his time (about two and half years) in the blacksmith’s shop. Here he learned the art of welding metal in a forge, making chains and much more. This was all very heavy work swinging a 16 pound sledge hammer day in and day out with the timing and precision of a chronometer. Rex said the art in “striking” for the blacksmith was to follow his hammer where he struck last – not just swinging at where you fancied.

But before this, Rex had a couple of hours each day hand milking the family cows on the Hillcrest farm, before breakfast and going to work in town. After finishing his apprenticeship Rex stayed there for about another five years over which he says the business changed greatly.

Rex them moved to work at Ellis & Burnand in Bryce Street on the mill tailing out on the big band saw with a six-inch blade driven by six-foot wheels. They used to mill timber till smoko time then take the saw away to sharpen. There were all sorts of wood coming in at the time – one memorable lot was some Oregon trees at least 40 foot long with very tight grain. They were cut up into 9in x 2in for seating for the stock car outfit opposite the airforce base.

Then Rex moved to a welding job in Frankton for the Ministry of Works making steelwork for the Waikato hydro dams. This was welding and nothing else from 7am till 6pm – all day every day. The work didn’t thrill him and it didn’t do his health much good either, but he needed the money as he and Val were about to get married in 1955. A better job cropped up in Cambridge with a flat so he took off to weld truck bodies again. There was a hole in the roof and as the sun shone through Rex saw the dust and muck he was breathing in!

The family went to the Mount for a holiday and some fresh air where Rex and Val saw a farm job which they fancied and easily got. The farmer Vern Laurent was also a contractor and was delighted to know that Rex could weld a bit. Rex said he fixed every wrecked gate, bit of pipework and machine on the farm!

Then they went to Tokoroa to a bigger town supply job and eventually into 50/50 sharemilking at Waitakaruru. They had a bit of a flood go through as soon as they got there but it was no problem. Then when they were just getting on their feet in 1966 another flood went right through the farm taking out 30 chain of stop bank. In the house the water was up to the ash pan in the range. Rex and Val stayed because the owners had been so good to them. Then with no stop bank 11 months later they had another flood.

Twenty one days after the flood the army worm appeared. Rex says the caterpillars marched across the paddocks, through the gates, down the race and into the adjacent paddocks. Vehicles were skidding on them on the road and the seagulls had eaten so many they could not fly! Rex used a hand spray to kill them and breathed in a fair bit himself. So he cobbled together a spray boom on his Farmall B tractor and got enough chemical to spray five farms. It was a farming disaster. Rex and family had to get out of their 100 acres and then went home to Val’s parents farm of 70 acres where they built up their business again over three years and three on another farm to earn enough to eventually freehold a farm of their own.

Bloat was another great problem at the time and in those days you had to struggle to drench each cow each day. Rex found that he became very allergic to the dust and smell of cows causing severe sinus problems.

So in 1973 Rex and family came to town again while Val was recovering from back problems from heavy lifting on the farm and when moving house. Rex got a job at Pacific Aerospace in the store in charge of the Inwards-Outwards goods and this was the time when some Fletchers (two to a container) went to Iraq and some were supposed to go to Rhodesia. Then Rex got into plant maintenance at PA and into jig making requiring both metal and woodworking skills.

At this time one of the staff at PA left to go to a job on the Isle of Man to construct an airship and invited Rex to go and join the team. Rex didn’t see much sense going to an island in the Irish sea where men had three legs, cats had not tails, sheep have four horns and there’s swamps on the top of the hills!

But he got a firm invitation to go and make jigs and tools to assemble the gondola and spent two years there coming home in 1990. On his return PA phoned him to work for them again where he did a lot of development work on the Fletcher CT4 when they put a turbine motor in it.

Rex and Val saw Air NZ were offering cut price fairs so they had a trip to UK intending to find a job but really wanting to see the Airship fly. It never did which was a big disappointment to folk like Rex who had done so much work on it. Rex said it was 12 million quid that went down the drain! Rex has the feeling that the inspection team were getting the jitters about safety and just dare not give it the final OK. Airships have not had a great record in history.

Rex’s father made a treadle lathe pre-1940 but Rex only watched and then his father built another when the family came to Hamilton when Rex was about 13. Rex turned his first egg cup with the help of his girl cousin who did the treadling. When he was at PA he got serious and bought a B-line lathe as there was nothing around at the time unless you wanted to spend a fortune on an import from UK.

But in 1987 before their Manx trip Rex and Val went to the first Putaruru exhibition just for a look. That look was the trigger – and along with what he saw at Kawerau Rex made his first big lathe in his son’s boat building workshop at Te Awamutu. This lathe was the first of many – and he is still developing new concepts in lathe design. Some of these Rex says are in fact old concepts that never got into mass production.

All of us in the Guild are regularly blown away with the diversity of Rex’s skills – from the massive to the miniscule. His precision and attention to detail is an inspiration to us all. 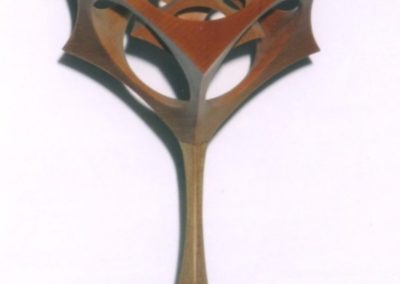 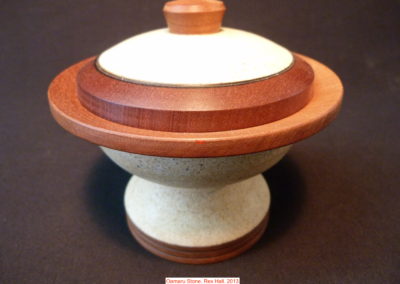 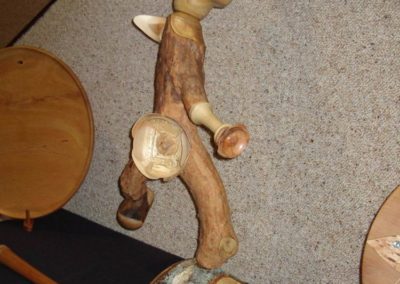 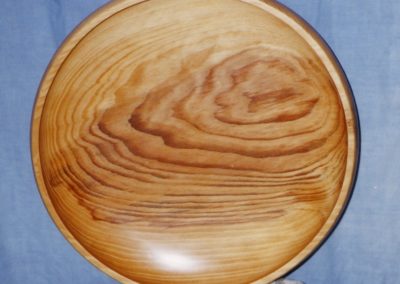 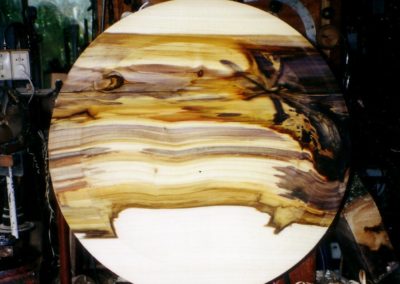 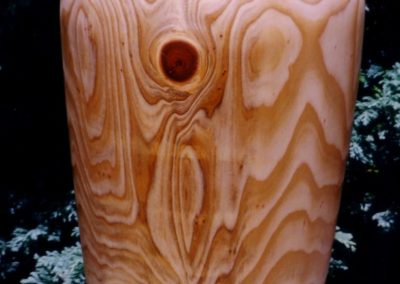 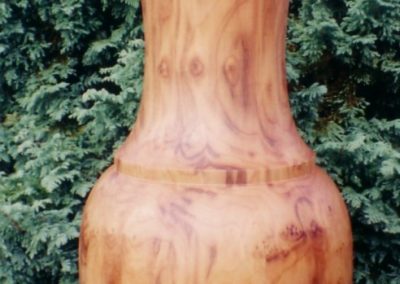 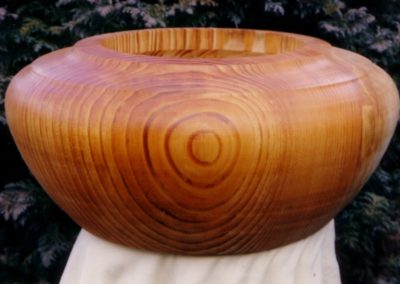 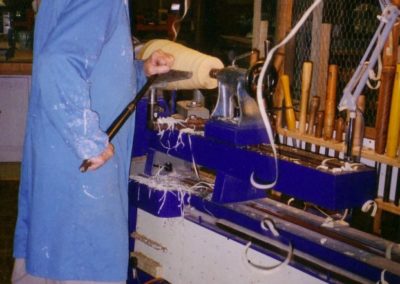